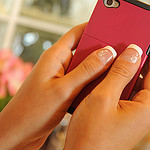 attention lately. First, Edward Snowden revealed the extent of which big brother has not only been tapping into cell phones and other devices, but the appalling frequency with which this occurs absent any kind of warrant. In response to all of this, Apple released their iPhone 6 with the ability to prevent law enforcement from being able to access your phone without your passcode. In fact, Apple cannot even access the phone through any back door. The new security technology effectively makes it impossible for Apple to access certain information on your phone even with a court order. They simply cannot comply because they lack the ability. While many in the tech industry and outside of law enforcement have celebrated Apple’s new security feature, the FBI and others are making a big fuss, no surprise. The director of the FBI has even gone as far as to request Congress enact new legislation making it illegal for manufacturers such as Apple to sell products which cannot be tapped by law enforcement. Even more egregious is the request by the director that Congress expand the law to require online companies such as Apple and Google to install backdoors for the FBI to access data. While the Supreme Court had just gotten its feet wet on some of these issues, it remains to be seen how the court will decide these rapidly evolving changes in our society.

Thankfully, the U.S. Supreme Court recently addressed the issue of phone searches holding police are required to obtain a warrant to search a person’s phone. All the same exceptions may apply to the warrant requirement but at least SCOTUS acknowledged the overwhelming public sentiment that phones should be considered private and beyond the reach of law enforcement’s snooping absent a warrant. This case is a good sign the justices will decide future cases in favor of the end users and limit the ever growing power of the federal government.